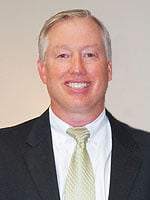 Dr. Simpson is one of two Otologists in our group. He grew up in Birmingham and went through the Mountain Brook school system. He received his B.S. degree from the University of Alabama in 1977, graduating cum laude. He then went to the University of Alabama School of Medicine, where he received his M.D. degree in 1981. After completing Otolaryngology residency at the University of Alabama in Birmingham in 1986 and doing a fellowship in neuro-tology at the Pappas Ear Clinic, he became an Assistant Professor at the University of South Alabama Medical Center in Mobile. In 1988 he became the Chief of the Division of Otolaryngology and remained in that position until coming back to Birmingham in 1991. After gaining additional experience at the Pappas Ear Clinic, then in private practice at Brookwood Hospital, he joined our group in 1996 to become the ear subspecialist for us. He is a member of the American Academy of Otolaryngology Head and Neck Surgery, a fellow in the American College of Surgeons, as well as in the American Academy of Facial Plastic and Reconstructive Surgery. He also belongs to the American Neuro-tology Society. He is also in the Birmingham Otolaryngology Society and served as its President in 1993 and 1994. Dr. Simpson has had articles in various journals and coauthored a chapter in an Otolaryngology textbook. He has made numerous presentations and has taught number instruction courses at the annual academy meeting. He also served as a book reviewer. Dr. Simpson received his board certification by the American Board of Otolaryngology in 1986.

Since joining ENT Associates of Alabama Dr. Simpson has narrowed his field of practice to otology and neuro-tology. This includes the evaluation and management of disorders of the ear, hearing, balance, and facial nerve. His patient base includes people of all ages. In addition to the medical and surgical management of chronic diseases of the ear, he has a special interest in treating surgically correctable hearing loss disorders such as otosclerosis. Dr. Simpson is also very involved in various community and church activities. Balances his time between his work, his wife and four children, and his hobbies of music, fishing, golf and tennis.